HISTORY OF THE INSTITUTION

It all began in the 1920s, at a time when female education was society’s lowest priority. A woman meant little to society except for her ability to please her husband and most importantly have male children.

At Kelewadi, Girgaum in South Mumbai, the Ratnachintamani Jain Kanyashala was taking shape as an education centre for girls. The trustee and donor Shri Durlabhjibhai Khetani, was happy with the development and the progress of the school. Shri Khetani was an industrialist, a freedom fighter and a social activist, living in Ghatkopar, a distant north-eastern suburb of Mumbai. It was then that he resolved to start a similar school in Ghatkopar, near his residence.

He contacted Shri Nyalchandbhai Sheth and Shri Jagjivanbhai Dayal who shared his revolutionary and daring vision of spreading education among girls to restore the pride and dignity of women. The founders believed that there cannot be a cultured society without educating women and that when you educate a woman you educate two families and the benefits pass down to the next generation.

Their mentor was a Jain saint, Shri Pandit Ratnachandraji Maharaj, who had championed the cause of women’s education in several states and was the recipient of the highest civilian award, the “Bharat Ratna’ from the Federal government. The Panditji inspired the founders to initially start a school to teach Jain religion to girls. This would help to draw out the girls from their homes into the school. He was confident that the ancient Indian adage that Religion and Education are two sides of the same coin will be verified here.

In 1924, the pioneers started the Ratnachintamani school with five girls to teach Jainism. The class was set up in a tin shed in the backyard of Jagjivan Dayal’s house. Next year the kindergarten was established and the year after Standard (Grade) I was set up. After that, every year one higher standard was added. By the time the school reached Std. IV, the place was too small to accommodate all the students. 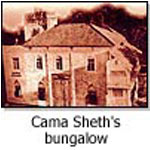 Undaunted by the lack of funds, the enterprising Shri Durlabhjibhai, went and bought a large property of a Parsi gentleman Shri Ratan Cama at the beginning of Cama Lane in Ghatkopar west in the year . He and Shri Nyalchandbhai then appealed to the community for funds, but the collection was not enough to pay for the property. Till then, Shri Ratan Cama gave his bungalow for an annual rent of Re. one only to conduct the school in his residence. Shri Nyalchanbhai went on a fast for eight days (called ‘athai” in Jainism) and people came forward and donated generously to the cause of the school.

In 1935, Shri Chunilal Sanghani, a Jain engineer offered his services for free and helped to erect a two-storey building next to Cama’s bungalow in the same premises. On the ground floor of the building, Shri Durlabhjibhai decided to construct shops with the intention of renting the shops to raise money to finance the free school. The two floors above accommodated the Principal’s office, the staff room, the laboratories and fourteen classrooms.

Freedom soldier Smt. Yashodaben Patel was the first Principal of the school. Under her leadership the first SSC batch passed the State Board exams in 1938. From this auspicious beginning the Founders have never looked back.

Gandhiji, who propagated women’s education, believed that women have as much right to education as men do. In fact, he said that given the choice of educating a son or daughter due to limited resources, the daughter should be educated first. To bridge the gender gap in education, the Trust set up the Sarvajanik Education Society in 1944, to give further impetus to the cause of providing free education to women, to look after the administration of the school and to liaise with the government education department for registration and grants.

In the 1960s, when the Bombay Municipal Corporation announced that primary education will be provided free to all students by the Corporation, the Trust handed over the Gujarati primary section from Std. I to Std. IV to the Corporation. The Corporation transferred the primary school to another location and only the pre-primary and secondary sections were managed at Cama lane by the Trust.

Meanwhile in 1955, the school Principal, Smt. Yashodaben earnestly requested the Trustees to set up a degree college so that the students can complete their education from kindergarten to graduation under one roof. There were no institutes of higher education in Ghatkopar, the nearest being at Matunga, which discouraged the girls to study further. After much debate among the Trustees, in 1957 in Cama Sheth’s bungalow, the S.P.R.J. Mahila Mahavidyalaya Guidance Centre was started, which served as a stepping stone towards the Centre’s affiliation to the S.N.D.T. Women’s University. The affiliation came in 1960 and the Women’s College of Arts was set up then.

In 1968 it was named Smt.Prabhakunwar Nathalal Doshi Women’s College of Arts after a gracious donation from Shri Nathalal Doshi. From a modest little bungalow of Cama Sheth, the college now stood proud as a grand 5-storey building (the present ‘A’ wing of college) which was erected in 1970-71.

On the school front, the Bombay Municipal Corporation reinstated the Gujarati-medium primary section to the Trust in 1979, and it was named Shri Mumbadevi Mandir Ratnachandraji Prarthmik Kanyashala in appreciation of a donation of Rs. 1.25 lakhs received from the Mumbadevi Trust.

In the English-medium school, things were developing at a fast pace. The preprimary section was set up in 1979 in the name of Shri Rokodia Hanuman Temple Trust who had donated money for the same. In June 1980 Smt. Ramkunvar Nyalchand Sheth English Primary School was opened and four years later, in 1984 Smt. Samratben Tarachand Mehta English Secondary School was started. The English primary section receives 100% grant from the BMC, but the preprimary and the secondary sections are fully unaided.

1984 marked the 60th year of the institution and a grand fund raising drive was organised. Philanthropists, who shared the management’s enthusiasm for free education for women, contributed handsomely towards the Trust’s ambitious plans of expansion and progress. Besides the naming of the existing faculties of the schools and the colleges in the respective donors’ names, the Diamond Jubilee year saw the inception of 3 new faculties – Smt. Shardaben Champaklal Nanavati Women’s Junior College of Science, Smt. Hiraben Manilal Nanavati Institute of Home Science and Smt. Kalavatiben Bhagwandas Boda Institute of Commercial and Secretarial Practices.

The decade from 1987 to 1997 was one of consolidation. The institute set up various laboratories and upgraded its facilities to serve the students better. Once the degree colleges were set and established, the management decided to expand its vision to cover vocational courses which would create better job opportunities than conventional degrees, for students coming from low-income group.

In 1998, the Fashion Designing Course was introduced as an autonomous self-financing course. In the same year the Trust launched the Dahyalal Dharamchand Meghani Short-term Vacation Courses to provide additional avenue for students to acquire skills during mid-term holidays and summer vacation. The Interior Design and Decoration Course was established in the year 2000 as there was demand for skilled people in this field.

In keeping with the management’s policy of expanding as per the need of the times, in the year 2003, the institution took a big leap forward by setting up the post-graduate department. In the first year, Master of Commerce was offered with specialisation in Marketing and Management. In 2004, Master of Arts was established offering specialization in Industrial Psychology. The Post-graduate department received a handsome donation from a past professor of the college, Smt. Devilaben Mehta and in January 2007 the department was named Smt. Devilaben Mehta Department of Post-Graduate Studies.

In the year 2004, the management formalized all its career-oriented programs under one Institute known as Swadhar Career Institute. Besides fashion designing and Interior designing courses, which were already launched, the institution also added courses on Beauty Treatments, Early Childhood Care and Education as well as Family Nutrition and Dietetics.

In the year 2005 the degree college underwent assessment by the National Assessment and Accreditation Council (NAAC) and was awarded ‘A’ grade.

The management was aware that women graduates failed to get jobs on the basis of conventional degree programs. Hence, besides the Career Institute, it also launched three new degree programs Bachelor of Computer Applications (BCA), Bachelor of Management Studies (BMS), and Bachelor of Mass Media (BMM) in the year 2007, as skilled people from these fields were in high demand in the industry. Later in July 2008 the BMM department was named Devilaben Mehta Department of Mass Media against another substantial donation made by her sons in her memory.

In the year 2010 the degree college, as part of the mandatory process of reassessment every 5 years, was once again reaccredited with an ‘A’ grade by the NAAC team.

In the year 2008, the management started several courses as a Partner Institute under Convergence Scheme of Indira Gandhi National Open University (IGNOU).